Your browser is not Javascript enable or you have turn it off. We recommend you to activate for better security reason<div class="billede"><img alt="HEVC vs. VP9" src="pictures/mini-samsungevolutionkit2013.jpg"/></div>HEVC vs. VP9 - Can Google win? - FlatpanelsHD

HEVC is the natural successor to MPEG4 H.264 and is widely believed to be employed as the next generation of codec technology, enabling 4K streaming. Google has a competing codec technology called VP9 and is making moves to challenge HEVC – but can Google win?

A codec is short for “coder-decoder” and is the reason why TV companies can broadcast or stream videos via the TV pipes or over the internet. Without these kinds of compressions technologies it would be virtually impossible.

HEVC – or H.265 – is the direct successor to mpeg4 (H.264) and jointly developed by MPEG and VCEG. It is said to be double as effective; in other words you can transmit a video using only half the data without compromising picture quality. VP9 is the successor to VP8 and developed by Google, after they acquired VP8 from On2 Technologies. Depending on whom you ask it is roughly on par with HEVC, mimicking many of the technical parameters, too.

HEVC and VP9 are fighting to become the de-facto standard for 4K compression. Is it a format war? We guess you could call it that, but just the make it clear, both could theoretically co-exist. The real question is; which one will be widely employed in TVs, media boxes, set-top boxes and the like? Which one do you have to look for when buying a new TV? 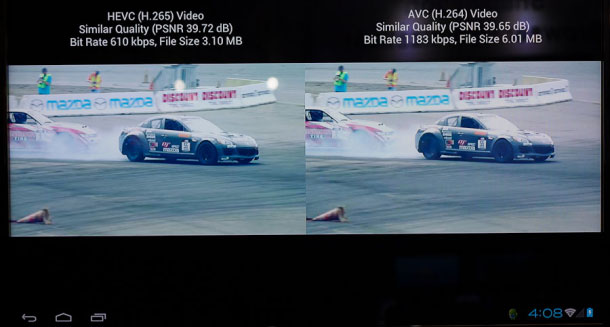 If you attended CES 2014 - like we did - you probably heard that Google had “partnered” with 19 hardware companies, including all of the most prominent TV makers. What Google did not say directly was that it is more like letters of intent for now, instead using carefully-worded PR-friendly sentences. A confused tech media fell in with both legs, reporting that the 2014 Smart TVs would support VP9. Well, no. Not true. It could happen in 2015 - at the earliest.

HEVC on the other hand is enjoying widespread support and you will be hard pressed finding a 2014 Ultra HD TV from a major TV maker without HEVC support. The TV players already seem to have decided on HEVC as the main format and are making moves to make it happen.

Samsung, LG, Sony, and Panasonic will add support for HEVC in their 2014 TVs, and Samsung will let owners of its 2013 Ultra HD TVs add HEVC via the Evolution Kit. Netflix will start streaming in 4K in a few months, and will be using HEVC, too. Several other TV providers, including Comcast, Paramount, DirecTV, and Amazon have also promised to start streaming in 4K later this year, which can only mean one thing: they will be using HEVC, too. Apple and Microsoft have more than indicated that they will support HEVC as the main format. Do you see a pattern here?

VP9, on the contrary, has no real support in actual products yet. The only way to view VP9 encoded content is on YouTube, and you need to use the Chrome browser and specifically tell it to use VP9 through a parameter command. If you find one of the many 4K streams on YouTube that have been available for years you are getting a H.264 stream instead. Google definitely has leverage with YouTube – a major player in the field – but is that enough to compete? If VP9 ends up being used only for YouTube videos it will probably suffer the same fate as VP8, and Google will be forced to offer a HEVC-encoded version of its 4K YouTube streams, too.

Looking forward, one of the real strengths of VP9 is that it is free to use for both content creators and hardware makers, but hardware makers fear that it will be the VP8 saga all over again, with patent infringement accusations and the like. The current mpeg4 (H.264) standard demands license fees, but the latest out of the HEVC group suggests that it will be free for content makers, only requiring hardware makers to cough up.

Still, many hardware makers seem to think that HEVC is worth the extra cost, as it is backed by several parties, instead of just Google. On the other hand, a concern for HEVC is that some relevant patent holders will refuse to license their patents as part of the HEVC group.

It is entirely possible that VP9 will live a quiet life as a YouTube codec, just like VP8 does, but Google is currently trying to position it as a real competitor to HEVC for use in mainstream devices. However, it still seems unlikely that VP9 will emerge as a real challenger to HEVC.

Learn more about the next generation of codecs and HEVC in our article on the subject.