Your browser is not Javascript enable or you have turn it off. We recommend you to activate for better security reason<div class="billede"><img alt="Philips 7 and 8 series TVs" src="pictures/mini-philips80002012.jpg"/></div>Philips' 7 series TVs are out - 8 series coming - FlatpanelsHD 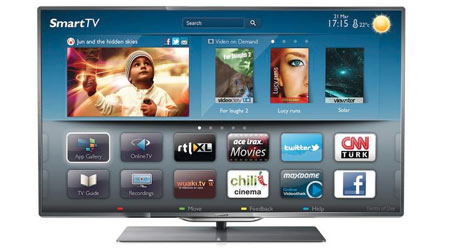 Philipsâ€™ low and mid-end TVs arrived in stores in May. The more expensive 7 and 8 series models are now also becoming available throughout Europe. Features include Ambilight, Smart TV and slim, minimalistic bezels.

Philipsâ€™ 7 and 8 series TVs in stores

Philipsâ€™ new TVs are now in stores throughout Europe, with the arrival of the 7 and 8 series TVs. Only the new 9 series TVs are not available.

The 7 series TVs have slim bezels, the Pixel Precise HD picture engine, Ambilight Spectre 2 which illuminates two sides, and Philipsâ€™ Smart TV Premium platform with TV apps. Philips also highlights active 3D and a USB recording function that becomes active once you connect a USD hard drive on the back. Philipsâ€™ new 7 and 8 series TVs are in stores now

The 8 series TVs take things to the next level with a 3-sided Ambilight system and the more advanced Perfect Pixel HD picture engine. The 8 series also features the Smart TV Premium platform and an ISF calibration system.